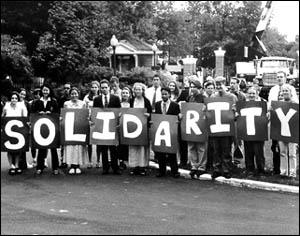 SolFed have launched our new community strategy, which comes after months of internal discussions. The strategy mostly existing best practice within the organisation, as well as drawing inspiration from other solidarity-based community organising in the UK and around the world. The strategy sets out the general principles we organise with, before setting out our approach to some of the more common issues we get involved in, from residents associations, anti-fascism and disputes with letting and employment agencies. The new strategy is reproduced in full below:

The general aims of this strategy are:

Our approach to community issues is not aimed at replicating the work of organisations such as the Citizens Advice Bureau, or indulging in NIMBYism with revolutionary politics tagged on. As well as supporting the efforts of residents to defend community resources and improve living standards locally, where appropriate we promote the ideas of working-class selforganisation and community self-management. Our ultimate goal is the self-emancipation of the working-class and the establishment of libertarian communism.

Direct action in the community can take diverse forms, from pickets, road blockages, and occupations of property to rent strikes, anti-bailiff mobilisations and mass non-payment of taxes. The hallmark of direct action is that it is action taken by the affected people themselves to directly achieve a goal without intermediaries.

Direct democracy is an essential feature of how we organise. Mass meetings should be organised as needed to involve as many people as possible and ensure community control of the struggle. Instead of electing a central/steering committee to make decisions for us, we should make the decisions ourselves through a delegate council composed of mandated, recallable delegates from each campaign or organisation involved. This avoids any one group or prominent individuals imposing their will by dominating a steering committee or through caucusing. We will oppose the inclusion of politicians, bureaucrats and the police.

In order to run an ongoing campaign, it will often be necessary to elect a secretary and treasurer for the delegate council. These roles should be administrative and unpaid, rather than paid, decision-making ones, and subject to immediate recall if it is felt they are not fulfilling their mandates. There should be no standing chair, rather a chair should be elected or appointed at each meeting as required. This keeps control of the campaign with the mass of ordinary members, through their mandated delegates, and minimises the possibility of being controlled (or demobilised) from above.

Due to the diverse nature of community issues, these general principles should serve as a guide to action. But we can also specify some of the more common issues in which we get involved - it is by no means an exhaustive list.

Many towns and cities are afflicted by racial divisions which only benefit the ruling class and must be fought against. We therefore challenge racism, sectarianism and all reactionary attitudes by appealing to people on the basis of class unity. We also reject the state collaborationist strategy of groups such as Unite Against Fascism in favour of a class struggle approach to fighting the scourge of street-based racism and/or neo-fascism. In general we will carry out anti-fascist activity with others through specifically class-struggle anti-fascist groups, rather than doing it under the Solidarity Federation banner. On the other hand, the long-term work of 'filling the vacuum' - organising around everyday community issues - is very much part of our role as a revolutionary union initiative.

We recognise that issues such as antisocial behaviour and violent crime have a destructive effect on the quality of life for many working-class people. We believe it is possible to tackle these issues without pandering to populist sentiment or criminalising young people, along the lines of the general principles set out in this strategy.

Deposit and wage theft are common problems, but agencies are vulnerable to direct action tactics such as pickets and occupations. SolFed Locals should take on this kind of dispute in line with the general principles set out here: not seeking to act as a service, but including the wronged individuals as active participants in direct action and seeking to build a wider culture of resistance.

Gentrification is a complex process, which often involves pitting existing small businesses against incoming big ones. Whilst we do not wish to end up fighting for one set of capitalists over another, struggles over local developments are often flashpoints which bring people together. Gentrification is also harmful as it can often break up established working class communities. For example, the practice of building luxury flats, which cannot be afforded by members of the community, in order to "yuppify" the area. This process not only prices out many poorer people in the community, but it is done without the consent of people in the area, which raises the issue of community control.

We recognise that residents and tenants associations can play a positive role in local community life, but they are also at risk of being co-opted by the State. We are in favour of active participation in such groups that are independent of the local council and police, and also support the non-hierarchical federation of these associations as a step towards community self-management.