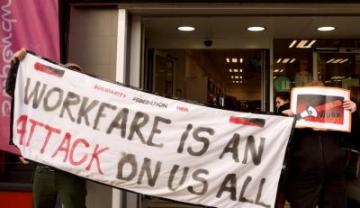 "I would have quit this job months ago, but I'd be sanctioned by the Jobcentre". That's what one friend told me after working unpaid overtime every evening that week, on low pay that barely covered bills and rent. It's a dilemma faced by everyone working in unsafe or illegal conditions. If you are fired then you have to get by for 5 weeks with no income while you wait for Universal Credit. If you quit, you risk being sanctioned and left for months with no money coming in at all. This is a system designed to punish workers for leaving, designed to keep us quiet and accept unfair or even illegal demands at work, while the rich rake in the profits. If we want to make better lives for ourselves then we should all make a stand against the benefits system, or it will undermine every attempt to organise our workmates.

How did it get this bad? It has been going this way for decades. I remember in the 2000s my friend's mum telling me "you can't have a life on the dole". That was after the New Labour government made cuts in the benefits for single parents. I won't list all the hardships my friend's family faced - there are enough lefty articles that see us only as victims, a victorian caricature like Tiny Tim from A Christmas Carol. But I want to ask: if things were bad then, how much worse are they now?

Apart from the temporary uplift for some benefits claimants during the pandemic, our benefits have been frozen for years. In reality that's a cut. We haven't seen benefits money this low compared to wages since before the 1950s. Housing is almost impossible to find. On top of the cuts, the Local Housing Allowance is set below the average rent for an area. I don't know anyone who isn't paying rent out of the money meant for food and living costs. Under-35s aren't funded for a flat, they are only paid enough for shared accommodation. This forces people to live with strangers in situations that are unsafe at best. Many shared houses don’t even have locks on the bedroom doors. One friend came home to find smashed glass and a pool of blood where a guest of her housemate had stabbed someone and broken down the front door.

The sanctions regime has been ramped up over the last decade, and now you can lose your benefits for months for as little as turning up late for an appointment. One study interviewed DWP staff who admitted that the system was designed to cause "psychological harm" to claimants. Those of us who are "fit for work" are supposed to spend 35-hours a week looking for jobs. In areas with high unemployment, those jobs just don't exist, making it impossible as well as unreasonable. This is combined with the health assessments brought in during the last years of the Labour government, famous for finding severely disabled people fit work. Altogether this has led to hundreds of deaths and suicides, many of them covered up by the DWP.

I'm writing all this, not so we can wallow in poverty and how bad it's got, but to give a clear picture of what we're up against. While unemployed people are seeing the worst of it, make no mistake: this is an attack on everyone. We don't need pity, what we need is solidarity from all working class people - or it'll be their feet in the fire next. Nor do we need more words from politicians, more condemnation of the Tories. The fact is that we can't vote our way out of this. Labour has always treated us like scum, whether it was sending us off to work camps in 1929, or cutting single-parent benefits in the 90s and 2000s. They had a hand in Universal Credit (**), and even Corbyn's manifesto made no promise to reverse the benefits freeze. No, the only way we can change this is to do it ourselves - through solidarity and direct action.

When we won our campaign against workfare, we saw first-hand how solidarity is the best way to stand up to the DWP. Workfare was a brutal scheme where benefits claimants were forced to work for free, getting no pay other than their usual benefits. The Solidarity Federation was involved in the campaign to end it, alongside organisations like Afed, Disabled People Against the Cuts, Edinburgh Coalition Against Poverty, and Boycott Workfare. The five of us are named in legal papers where the government admits we were close to forcing the whole scheme to collapse - which in the end, we did. Workfare was sold to us as training and "experience" to help people back into work, but in practice it was just free labour for corporations. Free labour that they fired people in paid work to make room for! At least one man even got sent back to his old job, just without any wages to go with it.

We beat workfare by targeting the employers, one at a time. When one dropped out of the scheme we'd move on to the next. Sometimes demonstrations escalated to pushing their way into shops and refusing to leave, other times they held a simple picket outside persuading people not to go in. (Some videos of anti-workfare protests: 1 2 3 4 5) This was possible because we made it clear how all workers were affected, how it was taking away jobs as well as hurting the people out of work. A great deal of people were turned away by the pickets, because they saw how collaborating would be shooting themselves in the foot.

Appealing to everyone also made it easier to organise. Many benefits claimants are in and out of work all the time, so organisations that only appeal to unemployed people tend to be unstable. One claimants union I joined at the time folded because all the organisers got jobs! Recognising that any of us is just a p45 away from the jobcentre made the Workfare campaign much stronger. In the end, by 2017, all four of the main workfare schemes had been scrapped – Mandatory Work Activity, Community Work Placements, The Work Programme and the Help to Work Scheme. We made them unworkable. Only a few limited ones are left.

Now, consider that for all the effort that's gone into promoting Corbyn and the Labour Party, in 2021 we are still stuck with the same sanctions and benefits cuts as we were before. But by solidarity and direct action, a few thousand claimants and their allies were able to bring down a flagship government policy! That's the power we have when we stand together and are determined to fix things ourselves.

Back in the present, there are two ways I can see to end the benefits freeze. One is to take a leaf from the environmentalists' book - to start a "dole rebellion" where we blockade roads and infrastructure until the government gives in. The other way to do it is "death by a thousand cuts", where we try to resist every small injustice and indignity from the DWP. Try everything: file appeals, protest, occupy the jobcentre and refuse to leave until they help us. That last one is a very effective tactic and we've heard of claimants using it successfully across the UK, from Plymouth to Edinburgh! Challenge them for every inch and escalate slowly until there is a major ruckus any time a claimant is sanctioned, anywhere. Either of these strategies could work, and the first thing to do is to throw ourselves into the task of organising at our local jobcentres. Start small, challenge what we can, win small victories, and build up from there.

I'll end with a few lessons I've picked up over the years of trying (and often failing!) to organise on benefits:

Best of luck with your organising!

** - This will be controversial, so here's our reasons for saying it. In 2008 Labour released a paper endorsed by Gordon Brown announcing their intent to move to the single benefit system recommended by David Freud (now Baron Freud). After working for Labour, David Freud went on to join the conservatives and was a key figure in setting up Universal Credit. The paper also recommended tougher sanctions and forcing claimants to do unpaid "Work Experience" - the origin of Workfare. This is the paper on "reforming welfare to reward responsibility", published July 2008. The Labour-supporting Daily Mirror called the plans "workfare" at the time. In October 2008 the charity Shelter was already raising the alarm about Labour-Tory plans for more punishing sanctions.