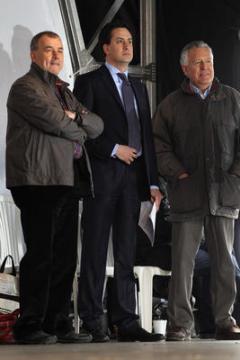 The trade unions have worked hard over the last twenty years to shed their cloth cap image.  Notions of class struggle, with the unions as the means of organising that struggle, have been dropped as unbefitting the modern era.  The focal point of today’s movement is no longer the workplace but the union head or regional offices. Housed in modern buildings and staffed by professionals, able to offer the best possible service to managers and workers alike, these offices stand as the physical embodiment of  all that is ‘best’ about 21st century trade unions.

Needless to say, in keeping with the stylish  fixtures and fittings, all talk of politics and class have been banished from the modern trade union office save for the odd faded photograph of workers taking action, a reminder of the bad old days. The politics of solidarity and class unity that were once at the heart of the workers movement have been replaced by office politics: suits, company cars and expense accounts.
At the head of the modern trade union stands the General Secretary, and as is to be expected they receive a CEO’s salary for the onerous task of heading such large organisations.  A good example of a modern trade union leader is the head of UNISON Dave Prentis who, according to the union figures, received a total salary and expenses of £143,887 in 2010. The TUC (Trade Union Congress) response to NHS privatisation? A candle-lit vigil. Without candles.
At the ‘militant’ end of the spectrum, Unite boss Len McCluskey has been talking all summer about anti-cuts civil disobedience and strike action. For all the talk, he’s encouraging a vote for Labour - who are also committed to making widespread cuts. Of course for union tops, talk is action, with occasional one-day strikes thrown in to keep rank-and-file militants happy.
With the union movment now so far removed from the workplace, everyday solidarity, direct action and mutual aid has been replaced with a sense of inevitability. Workers have forgotten how to win. After all, these are terribly old-fashioned ideas. Throwbacks to the 1930s: an era of economic crisis, mass unemployment, obscene inequality and growing poverty - totally unlike the conditions we face today.