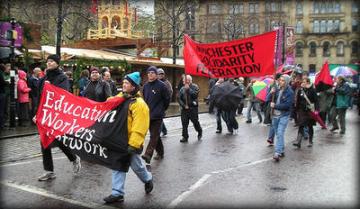 Solidarity Federation (SF) believes in taking control of our lives where we live or work, rather than leaving things to the dictates of politicians, managers and so called ‘experts’. Through solidarity and acting together, we can deal both with our local problems and at the same time work to change the bigger picture, and change the system that means power and profit for the few.

We believe we should apply the same principles to actions we take around local issues to those we take at work. Across industries, we organise in Networks; geographically we organise in Locals, to support each other in our struggles and to fight for our interests, both in and out of the workplace. We are part of the International Workers Association, organising with like minded people across the world.
Because our organisation comes from the bottom up, what Locals do is the basis of our activity, towards our goal of building a libertarian solidarity movement.

Members of our London locals were heavily involved in the Lewisham Bridge school occupation, struggles by London Underground cleaners and the Visteon and Vestas factory occupations. Brighton were also very active in supporting the Vestas struggle. They made collections, which were used to buy some of the food that was broken through the blockade and helped found the Brighton Vestas Workers Support Group. As well as supporting the Vestas workers, the Liverpool local has also been involved in supporting a refuse workers strike at Enterprise Liverpool, while the West Yorks has been active supporting the Leeds refuse workers’ indefinite strike.

Our London Locals have also organised two pickets of the Serbian Embassy in solidarity with the Belgrade Six. The London groups have fairly regular discussion meetings and regular socials, and also have links with the Goldsmiths college group Autonomy and Solidarity and the Anarchist Federation (AF) in London. The latter has been the basis for a joint meeting on the crisis, a May Day social and a new group, London Education Workers Group, for those working in the sector.

We are also involved in anti-fascist activity. Liverpool SF are very involved in the local anti-fascist group and have helped organise several successful protests against the BNP in Liverpool, most recently around the court appearances of a prominent local BNP member who is charged with assaulting an anti-fascist. The Manchester Local have been involved in similar activities, such as opposition to the recent ‘English Defence League’ march there, while the Brighton Local helped prevent the BNP launching a public branch.

In Manchester, London and Brighton, Locals have organised numerous public meetings on topics such as the economic crisis, anti-militarism, combating the far right and anarchism and sexuality. In Liverpool, the Local regularly leaflets political events, and recently attended the James Larkin commemoration and a Peace & Ecology fair in the city in July for this purpose.

West Yorkshire SF have done stalls in Bradford city centre and attended events such as the Stop the War Naming the Dead ceremony in Leeds. Brighton SF organised the English end of an international day of action for Natalia Szymanska, who was sacked at Subway in Belfast for being pregnant. The Local also attended the Smash EDO May Day and Labour Party conference demonstrations. Brighton SF have also established the monthly Brighton Class Struggle Forum, originally with Brighton AF and set up an embryonic workers group at Sussex University.

As a national organisation we meet at least twice a year.  Our conference decides our positions and priorities, we make space for debates at a weekend school. We also meet regularly regionally.

Organising on  the job
We believe workers’ organisation has to be based in the workplace, and must involve all workers, regardless of which union they are in - or whether they are in a union at all. Pay rises, job safety and control over how we work will not be won by representation, but by workers taking action for themselves, independent of their bosses or any would-be representatives. “Workers rights” will only be won by direct action, or by negotiations backed up by the credible threat of direct action, regardless of legislation. To act in our interests as workers we must build effective organisation in the workplace.