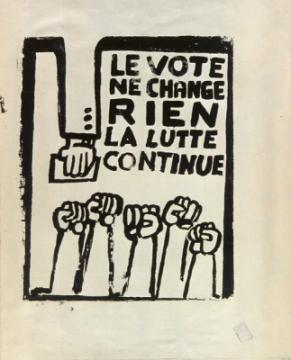 It’s election season again. It’s a time of photo-ops and promises, manifestos and controversies. But behind the endless announcements, allegations and denials, is anything really at stake? After 13 years of Labour government, many people want a change. The economy on which Gordon Brown staked his reputation as Chancellor has nosedived on his watch as Prime Minister.
It’s true that Labour can’t be singled out for blame for the recession. Its underlying causes stem from the very nature of capitalist economies and their tendency to boom and bust. However having boasted of ‘no more boom and bust’, Brown certainly has egg on his face.
Labour’s only serious rivals are David Cameron’s Conservatives. The Liberal Democrats largely exist to persuade voters the British system offers more meaningful choice than the US two-party system, while fringe parties like the Greens and the BNP function as a protest vote for left and right respectively. So what do the Tories have to offer.
Many commentators have commented that David Cameron seems to have modelled himself on a young Tony Blair, and much like Blair’s New Labour project the Tories are like all opposition parties promoting themselves as the party of change. However on the face of it there is little between the two main parties.
Gone are the days when there was at least a semblance of ideological difference between parties. We now have ‘post-political politics’, where parties compete how best to manage the society which is taken as the natural order of things.
Consequently, an economic crisis stemming from a very specific growth-driven, profit-led system and deregulated banking has been treated as a natural disaster. Thus the main spats between Labour and Conservatives have centred on the technicalities of when and not if to take the axe to public services, impose pay freezes and cut benefits for the unemployed and vulnerable. Groups of economists have publically lined up behind each party, and so the election becomes a ‘choice’ between whether we want massive cuts or… massive cuts, a few months later.
Labour’s position is that the cuts must be gradual but severe, with public expenditure cut by up to 13% over three years. This they argue is necessary so that the supposed economic recovery can continue. However the Tories say this is too slow. While agreeing on the extent of the cuts, they say government spending must be slashed sooner so as to avoid a Greek-style debt crisis.
But what is taken for granted by both parties is more revealing than where they differ. Both parties assert that the economy is recovering. But while bankers bonuses have already returned in all their six-figure glory, most workers thrown out of work by the recession are still scraping by on £64/week dole and home repossessions have reached record levels.
Both parties assert that cuts to public services, wages and benefits are inevitable. But it’s conveniently forgotten that the rich-poor divide has been growing for decades and that in Britain today the richest 5% of the population own 60% of the wealth. The real choices are those we won’t be allowed to make at the ballot box. Whoever gets in, the result is already in: ordinary people will be made to pay for a crisis we didn’t create.
With so little real choice on offer at the ballot box, is it any surprise that election turnout continues to fall? Some such as the Power Inquiry note “widely shared concern over declining electoral turnout” and seek “to reverse the trend.” But workers have already been bypassing the political process altogether. A string of strikes and occupations have successfully fought pay cuts and improved redundancy terms, and there looks to be more of the same on the horizon.
Judging by Labour’s remarkable achievement of creating over 4,000 new laws in their time in office, perhaps there’s truth in the cynic’s saying that ‘if voting changed anything, they’d make it illegal.’