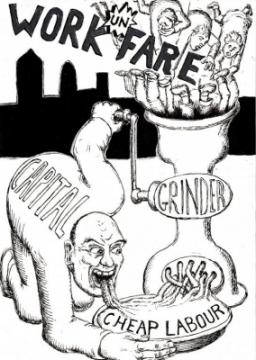 There is little evidence that workfare increases the likelihood of finding work. It can even reduce employment chances by limiting the time available for job search and by failing to provide the skills and experience valued by employers. (…) Workfare is least effective in getting people into jobs in weak labour markets where unemployment is high.

Workfare means doing unpaid work for your job seekers allowance (JSA) of up to £67 per week. The government claims workfare helps the unemployed and create jobs, and yet their own report says this is not true, especially when unemployment is high (see quote above).

There are two main workfare schemes. The ‘voluntary work experience’ scheme offers job seekers work experience placements. However if they change their minds after a week, they cannot pull out without losing their JSA. This means they effectively become unpaid workers for a host of private companies, including Tesco, Holland & Barrett, Asda and more. Sainsbury and Waterstones have already withdrawn from the scheme under public pressure.

The second workfare scheme is the mandatory Work Programme. On this, jobseekers are referred from the Job Centre to one of several private workfare agencies. These include multi-million pound companies like Avanta, Reed and A4e, where four arrests have recently been made in a fraud probe. These companies arrange mandatory full time work placements. Failure to comply can lead to JSA being stopped.
There is also a new policy that could mean disabled people on employment and support allowance (ESA) could be compelled to undertake unlimited, unpaid ‘work experience’ for charities, public bodies and high-street retailers.

Workfare doesn’t help the unemployed, and the government knows it. According to the Brighton Benefits Campaign, the real aim is simple: “What boss would want to employ a worker they have to pay, when the government will give them someone off the dole to do it for free? The aim of workfare is simply to drive down wages.”