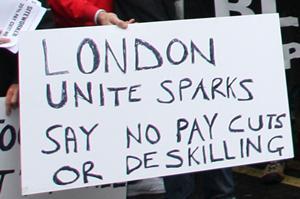 Earlier this year the ‘Big 8’ major construction employers announced plans to tear up an industry agreement on pay, grading and seniority which would result in pay cuts of up to 35%. Workers, not trusting the Unite union to act in their interests, organised themselves into ‘Sparks’, an independent rank-and-file electricians’ group run by a committee elected from their ranks. Their scepticism towards the trade union structures appeared to be vindicated when Unite official Bernard McAulay described Sparks as “cancerous” in a leaked email.

Sparks have been organising demonstrations across the country, including in Newcastle and London. These have also lead to brief site occupations, such as in Farringdon, where over 250 people invaded a building site, while simultaneously Sparks blocked a motorway tunnel in Newcastle. Unite have promised to ballot for strike action, but haven’t said when. In the meantime, Sparks continue to take Unite’s supposed endorsement of civil disobedience at face value - against the opposition of Unite officials themselves. To keep up to date with Sparks, see jibelectrician.blogspot.com and follow @JIBElectrician on Twitter.