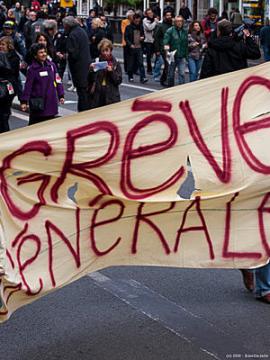 2010 saw huge social unrest sweep France in response to proposed pension reforms which would have upped the retirement age, amongst other cuts. Jean-Marie Cosson, a striking teacher from the town of Saint-Nazaire talks about the revolt at one of the last bastions of the worker’s movement, where the entrance of the lyceéns (young students) into the movement was given an ovation by ‘their fathers in blue collars.’

What’s the situation  at Saint-Nazaire?
J-M Cosson: It’s still delicate. On the 7th of October, before the lyceéns had even started to consider participating in the movement, some hooded guys went into a lyceé and smashed some windows. Bizarre… The end of a demo in October, which had got 20,000 people together (Saint-Nazaire has a population of 70,000), didn’t go well. The gendarmes (paramilitary police) fired tear gas at the lyceéns, even though their representatives had negotiated with the regular police to avoid things turning bad. This time justice didn’t wait for many years like it did for (former President) Chirac. Three guys went straight to trial. Two got two-month mandatory sentences.

How does the movement organise itself between public and private sector workers and the lyceéns?
The general assemblies are held per sector, and the co-ordination is done systematically. For example, on the 13th of October the lyceéns blocked their establishments in the morning. Then, the guys from the shipyards organised a meet-up for a general assembly. The workers from Airbus, from the refinery at Donges, the train drivers and the teachers arrived. Followed by hundreds of lyceéns who were given an ovation by their fathers in blue collars. These are the intense moments, where solidarity is rediscovered. Lyceéns, teachers, train drivers, refinery strikers, we’re all joined up.

What are the debates in the general assemblies?
During the general assembly at Donges refinery, where 350 workers were present, the indefinite strike was debated, with the understanding that they weren’t going to vote again to strike every 24 hours. They decided to blockade the refinery until the 18th of October. In the education sector, some voted for an indefinite strike. Others didn’t support the idea of a strike for its own sake, to stay at home and be content to fill up the state’s coffers by allowing it to withhold wages. So it was decided to have actions every day: we wanted to attack the sites of economic production, to hit the wallet. Above all, we wanted to avoid finding ourselves opposed to one another, public against private. It’s been 40 years that they’ve been teaching us to be individualists.

Where’ve the blockades been? How have you been trying to extend the movement?
The Donges refinery is blocked. The guys help the twenty employees of the petrol depot nearby to maintain the strike pickets and to prevent the police from occupying it. In the small businesses it’s delicate. The guys daren’t …

Did this convergence of strikes and sectors start up quickly?
The unions called us into the streets many times in quick succession. We told ourselves that if we didn’t take the matter in hand, the movement would croak. Fed up with marching! Especially since some unions stopped saying the words “general strike”.

What’s the role of the union federations in the movement at Saint-Nazaire?
Little wars between branches always exist. So do contradictions between what the national leadership say and what goes on at a local level. We ask ourselves sometimes why they don’t get behind the movement more firmly. (…) The movement has federated itself between generations and between the different sectors. We don’t demand to know each other’s union affiliation. We don’t give a fuck! I’m in SNES (FE teacher’s union): that gives me access to some information, but we don’t show off our badges.

What have you made of the media’s treatment of the movement?
At the moment I often have an urge to turn off my television, because I get so wound up by the bulletins! What they say about the lyceéns is unsupportable: always to hear this talk of ‘manipulation’, as if they were incapable of thinking on their own. When the kids are told that they become self-managed entrepreneurs at 16, that’s not going to make anyone happy.


This interview was originally conducted by by Ivan de Roy, for BASTA! and published in Jusqu’ici (‘hitherto’ or ‘til now’), a journal of the French anti-austerity movement. It was translated by our friends at www.liensjournal.wordpress.com