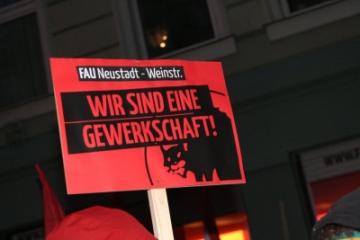 Across the world, other sections of the International Workers Association have been fighting state attempts to repress workers organisation.
In Serbia, in a dramatic turn, six Serbian activists, known as the Belgrade Six (for more details, see Catalyst #22 - available at http:// www.solfed.org.uk/docs/catalyst), were released on bail on the first day of their trial on February 17th.
The Six had been charged with the serious offence of “international terrorism” in a move widely seen as an attempt by the Serbian state to undermine workers’ organising.
As we go to press they are due back in court on April 23rd , and will now face lesser charges. Four of the six are members of the Anarcho-Syndicalist Initiative, our Serbian sister organisation and the campaign to support them will be ongoing.
Meanwhile, in Berlin’s Mitte district is an art-house cinema called Babylon. The working conditions there were awful, so workers joined the Freie ArbeiterInnen-Union (Free Workers‘ Union; FAU) in January 2009. They chose the FAU because it’s a union where their voice is heard, that acts with its members’ interests in mind and which had already helped one of their colleagues.
After a turbulent start, FAU presented a contract to the bosses. The bosses ignored it, then refused to negotiate. FAU launched a boycott. The bosses then signed a sweetheart deal with ver.di (a giant German union which had virtually no members at the cinema).
When FAU didn’t give up, the bosses took them to court and got the boycott banned, and then got FAU banned from calling itself a union, or even a grass-roots union. There have been protests outside German embassies all over the world in support of FAU and their struggle continues.
This dispute also offers a lesson for those who think that electing better politicians will improve things. The cinema is backed by the Berlin government, which includes the socialist Left Party, who have been as keen as mustard to stop workers organising themselves in FAU while backing the top-down boss-friendly union ver.di.
For more information on these cases, see detailed articles in Direct Action #49 - Magazine of the Solidarity Federation, available from www.direct-action.org.uk