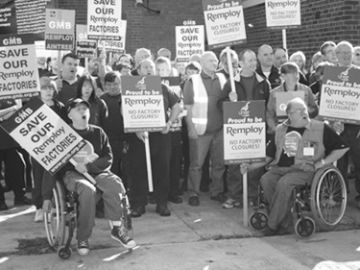 Remploy employs over 5000 disabled staff in specially adapted premises, receiving £111 million in government funding. In May last year, the government announced the closure of many factories, with between 500 and 2000 job losses.

These factories provide a safe place to work for many disabled people unlikely to find “mainstream” employment. The government pretends that it is now opposed to segregated workplaces for disabled people, but the real reason for closing the factories is cost.

Union activists called for industrial action, most Remploy workers are union members and over 80% voted for action.

There have been blockades and pickets of factories across the country. In York, strikers blocked lorries from taking away equipment before the factory was due to close.

Some charities, like MIND and Mencap, have supported the closures, stating that disabled people should be working in mainstream employment. However, there are many barriers to mainstream jobs such as access and discrimination. How many disabled people do you know in “mainstream” employment?

Many Remploy workers feel they can’t move to the merged factories because of the disruption involved, so how would they fit into mainstream employment? They feel they are being dumped on the scrapheap; their rights ignored and wages forced down.

Since this article was written, 30 factories have been shut. The GMB union stated that the “campaign goes on”, and that more action is planned, although there is no indication of what this might be.