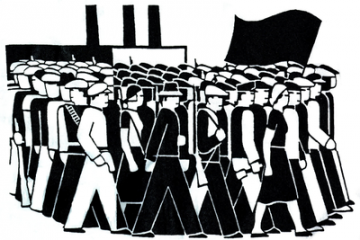 "Direct Action is a notion of such clarity, of such self-evident transparency, that merely to speak the words defines and explains them. It means that the working class, in constant rebellion against the existing state of affairs, expects nothing from outside people, powers or forces, but rather creates its own conditions of struggle and looks to itself for its means of action." - Emile Pouget

What is it?
Direct action is, as the name may imply, action taken without any mediator between those taking it and the desired aim. Rather than pleading with our ‘betters’ to make changes for us, direct action is the practice of simply doing it for ourselves. Recognising that in a society defined by rule of the capitalist class - bosses, politicians, bankers - over the rest of us, all that we can acheive is what we can force from the capitalists with our collective strength. The practice of direct action is therefore about imposing our collective power, and leaving those who run society no choice but to accede to what we demand. Directly in opposition to party politics, direct action sees that only when we act for ourselves - without being represented by politicians, unions or any other would be representative - do we have the ability to change the world, and begin to shape it in our interests.

“100,000 proletarians armed to the teeth are nothing if they place their trust in anything beside their own power to change the world.”

These are all however popular misconceptions, spread by both the media and many activists alike. But in divorcing the practice of direct action from the class struggle, by associating it with individual stunts or creative forms of protest, such misconceptions help deprive workers of the most powerful weapon we have: ourselves, and our collective power to change the world.