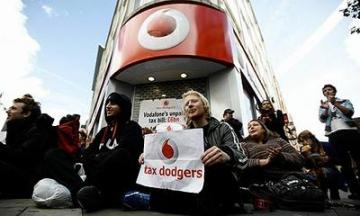 It’s said that only the little people pay taxes. The government seem to agree. VAT went up to 20% in January. Barclays Bank paid £113m in corporation tax, which was just 2.4% of its annual profit. Boots paid just £14m last year, about 3% of its profits. Vodafone were famously let off £6 billion by George Osborne when he became chancellor. Lots of big companies pay a lower proportion of tax than those of us in work pay national insurance, let alone income tax.

To make sure that this continues, the government are cutting the tax inspectors at HM Revenue and Customs. And they have even more audacious plans for removing corporation tax for big companies on their overseas earnings and allowing them to offset their costs against profits here, meaning they pay even less. Tax expert Richard Murphy has estimated that this will run into billions of pounds lost to the exchequer, leaving ordinary people to suffer in increased personal taxes and cuts to services.

The grassroots campaign UK Uncut has been taking direct action aimed at disrupting those businesses which are most blatant in avoiding tax. The government pretend that “we’re all in this together” and repeat the Thatcherite mantra that there is no alternative. The truth is that the government will always act in the interests of big business, that’s what they are there for. That doesn’t mean they have to go unchallenged. If British people were on the streets as they have been in Egypt, Tunisia or Greece, would the government really be sanctioning another huge tax cut for those who least deserve one?