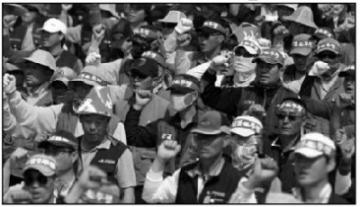 China is experiencing a rising wave of industrial unrest, as workers increasingly turn to collective action to fight against their exploitation.

Rapid industrialisation over the past few decades has created massive internal migration from the countryside to the cities on an unprecedented scale, dwarfing Britain’s industrial revolution two centuries ago. Now, this new urban working class has begun to flex its muscles, disrupting production in order to assert their demands.

The high-profile suicides at Foxconn, who make iPhones for Apple, were merely the tip of the iceberg. There, angry workers rioted over sweatshop conditions, chanting “capitalists kill people” and brandishing pictures of the CEO of Foxconn, Terry Gou. The company quickly offered improved wages and conditions in an attempt to quell the storm. However these headline-grabbing measures were quickly eaten up by reductions in overtime and speed-ups on production lines.

Elsewhere, 1,000 workers at the Denso car parts plant in the southern province of Guangdong won a two-day strike over poor breakfasts. China’s factories are vast – some the size of whole cities. Some employ tens of thousands of workers at a single site. Coupled with long working hours, this means workers often don’t leave work to eat meals, and the quality of those meals has proved a flashpoint. Workers ignored the pleas of the official union to return to work, and forced company bosses to improve meal provision.

For nearly three decades, corporations have increasingly relocated manufacturing to China to take advantage of a vast supply of cheap labour and lax regulation. The consequences of that lax regulation have also provoked social conflicts. 1,000 villagers in Jingxi county, Guangxi province, near the border with Vietnam recently protested against pollution from an aluminium plant owned by one of the country’s largest aluminium producers. Villagers blocked the gates to the plant and damaged production facilities, and one local government official was taken to hospital after being hit by stones.

In the past two months workers have walked out at three Honda plants, a Toyota supplier, a Hyundai factory in Beijing, a rubber products manufacturer in Shanghai and a Carlsberg brewery. Recently, workers at Japanese electronics firm Tianjin Mitsumi crippled output with a sit-in, complaining they were being asked to work extra hours for no extra pay.

The rising assertiveness of Chinese workers is causing some corporate investors to look elsewhere. However, industrial unrest is a pattern repeated across the region. In Cambodia, workers staged a three-day strike in July in a dispute over the minimum wage, while in Vietnam thousands of workers at a shoe factory staged a strike demanding higher salaries. While wages in Vietnam and Cambodia are still a fraction of those won by Chinese workers, increasing militancy is rapidly closing the gap.

Beverly Silver is a Professor of Sociology at the Johns Hopkins University in Baltimore, and an expert on workers and globalisation. She is not surprised by the latest developments, stating that “corporations have been chasing the mirage of cheap and disciplined labour around the world, only to find themselves continuously recreating new militant labour movements in the new locations.”