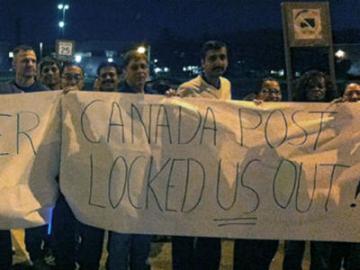 FOLLOWING WEEKS of rolling strike action in a dispute over ‘modernisation’, Canada Post locked out its 50,000 workers on the night of 14 June. The last time the union went on strike was in 1997 when the workers were off the job for two weeks before being forced back to work by federal legislation. Winnipeg postal worker Michelle Fidler explained “nobody ever got rich working at Canada Post in the position I’m in. I make ends meet. I don’t have a fancy car or a big house, and I work hard. And I don’t think the general public knows exactly how difficult that job is.”

A flashpoint in the dispute has been Edmonton. Tensions have been rising since widespread unofficial action in April was branded “illegal” by company bosses. The following is an account by an Edmonton striker. In June Canada Post declared a series of service cuts that reduced the Letter Carrier work week down to three days a week. On the first day of the service cuts there were several early morning actions where hundreds of Letter Carriers showed up for work and demanded to deliver mail that had piled up inside their depots. In Edmonton several depots took this one step farther by sitting down inside the depot and refusing to leave. Several other depots rallied outside and marched around outside their workplaces.

Following these actions the Canadian Union of Postal Workers held a demonstration where over 300 Postal Workers marched on Depot 9, one of the largest and most militant depots in the city. The workers staged an occupation, with management locking themselves in their office to hide from the angry mob. Workers with cameras photographed piles of mail stuffed into the depot, exposing Canada Post’s lie that there was no mail to be delivered.

As the workers filed out of the plant they noticed that about ten members of management were staying behind, many putting up tarps over the windows so no one could watch them operate mail equipment. Incensed, they turned around any trucks coming in and parked a 5-ton Canada Post vehicle in the truck gate and padlocked the mail inside.

Several hours later the management team started sending their people out to go home. The pickets locked arms and chanted “no one in, no one out”. Management was informed that the workers sincerely hoped management had brought pyjamas. When management finally left the building they were jeered and heckled.

The day was the high water mark in years of struggle for several militants in the Post Office and there is no doubt we will carry this story with us for the rest of our lives. But it is also just the beginning. Yesterday workers got a taste of their own power and made the first step towards taking back control over their own work. This won’t end with a new collective agreement and it will continue when we all walk back into the post office with our heads held high.