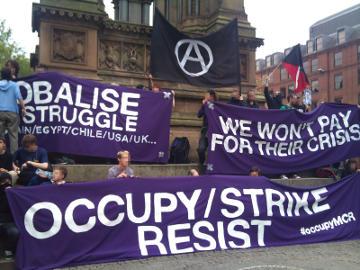 So what’s the alternative? If you listen to most of The Left, either we should create a new party (why would they be any different?) [3] or “vote labour without illusions”, because they are “the party of the working class” (bollocks are they!) [4]. This is obviously not going to change anything. All it does is channel our anger at being screwed over into a process designed to pacify us. If we want to make our lives better we need to take action for ourselves, not vote for “representatives” to do it for us.

Rather than trying to get another rich liar politician into power, anarchists are working in their communities to solve problems through “direct action”. When workers aren’t paid the wages owed them, rather than asking the government to give us better legal protection, we take action to force employers to pay. We’ve won many cases like this [5]. Rather than asking the government to end the “workfare” programmes currently used against benefits claimants, we are shutting them down one by one [6]. The government has even claimed that AFed and SolFed, among other groups, are a serious threat to workfare! [7] This is despite the involvement of only a few hundred people. Imagine what we could do with several thousand!

Anarcho-syndicalists also work towards a society where we have real democracy. In SolFed, we vote on the issues facing us directly, rather than electing representatives and expecting them to make decisions for us. All our roles are taken on by volunteers – people with the same pay and the same troubles as all the rest. And unlike politicians, if anyone steps out of line they can be recalled right away. In the future we want workplaces and communities to be run like this: with everyone having a say, and decisions made by a majority rather than a few managers and shareholders. Bosses are the dictators of the workplace. We can’t be free until they are overthrown.

Voting is a waste of time and only serves to dull our anger. On the other hand anarchist tactics – grassroots organising and direct action – are making a difference right now. If all of us who don’t vote got together and took action (voted “with our feet”), then we could take back all the rights and benefits we lost under the last Tory government, with more besides. So let’s get organised, get active, and give ’em hell!

This article was published on 30 April 2015 by the SolFed group in Bristol. Other recent articles: