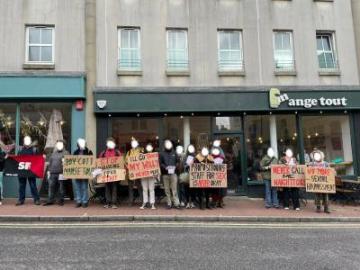 Brighton SolFed started a public campaign against Brighton restaurant, Mange Tout, on Sunday 6th February. We had been contacted by three former workers, who had all experienced and/or witnessed various forms of sexual harassment from both a colleague and an owner. After raising the issue with management, one worker was unfairly dismissed and the other two faced constructive dismissal, with the work environment becoming so uncomfortable they did not feel safe returning.

We are supporting all three former workers together in a direct action campaign to collectively demand Mange Tout address their failings, implement meaningful changes and compensate the workers for the financial losses and emotional damages they have incurred.

While it is important for the affected workers to receive compensation for personal losses and damages, the three workers are conscious that the work culture needs to drastically change for the sake of any future employees. This is why they have taken a transformative justice approach in demanding steps that will hopefully begin real, structural change at the establishment.

Mange Tout were given two weeks to respond to our initial letter, but have not yet engaged meaningfully or made satisfactory steps to resolve the issue. They have rather been deflecting blame by claiming that the perpetrator is no longer employed there and there has been a police investigation. This is not the full truth, the complaint was raised about more than one person and there are still perpetrators at Mange Tout. The issue goes deeper than just one individual and involves multiple cases of harassment as well as unfair dismissal and the attempts by management to cover this up.

We began our public dispute this week by picketing the restaurant, handing out leaflets and holding signs to inform the public about what happened. The public reaction was overwhelmingly supportive, and we succeeded in turning away the vast majority of their customers during the hour we were outside. As we were leaving, we were approached by two police officers who took issue with some language on a sign (‘“I’ll go touch my willy” is never okay to say’), deeming it offensive. We find these comments (made by a colleague) deeply offensive too, which is why we are publicising them!

Since the picket, SolFed has been contacted by an independent HR consultant, inviting only one of the workers to what they have described as a “grievance investigation”. The Mange Tout management's strategy seems to be to act as if they didn't fire this worker for raising a grievance. Despite the former worker rejecting this as inadequate and too late, the HR consultant has said that the hearing will take place whether they are present or not. Their sole engagement with the issues raised so far has been to impose a meaningless process on a former employee that feels more like disciplinary than a grievance.  It is an attempt to individualise the dispute and isolate the workers, through only acknowledging one of their complaints. This is a performative gesture - Mange Tout are attempting to squirm out of responsibility now that this dispute is public to avoid any accountability. This issue is a collective one, and the three affected workers will not be isolated and divided.

Sexual harassment is especially prevalent in the hospitality industry, but all too often goes unacknowledged or dismissed as simply “part of the job”. This kind of sex discrimination is however completely unacceptable and illegal under the Equality Act 2010. With the mean average employment tribunal award in 2019/20 being £17,420 for sex discrimination and £10,812 for unfair dismissal, we know that our demands are more than reasonable (https://www.morton-fraser.com/insights/employment-tribunal-award-statistics).

With this dispute now in the public eye, we hope to set a precedent that survivors of harassment will not be silenced, and that the businesses perpetuating this culture face real, material consequences. Until Mange Tout meaningfully engage with us to remedy these issues, we will continue this public campaign.

This article was published on 11 February 2022 by the SolFed group in Brighton. Other recent articles: