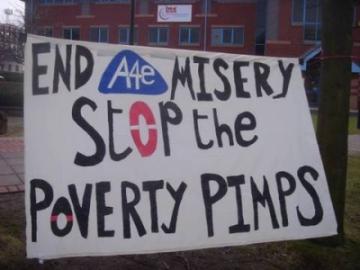 With around six jobseekers to every vacancy it may seem strange that the government is paying private companies to compete with jobseekers to take those jobs, but that is exactly what the Work Programme is about.

Leaked documents show that one of the contracted workfare providers, A4E, suggests daily priorities for its branches should include: reviewing job centre vacancies, newspaper listing, subscribing to job alerts and, of course ‘telesales calls’ (which is to say offering their services to the businesses that are recruiting).

These were and continue to be the tasks assigned to unemployed people as conditions for receiving Jobseeker’s Allowance (JSA) - with a requirement that activity records are kept and sanctions dished out for failure to satisfy the criteria set out in their jobseekers’ agreement.

The provider’s interest in performing these rolls is to ‘capture’ these jobs for themselves in order to fill them from the pool of jobseekers mandatorily assigned to them by the Job Centre Plus (JCP) and thereby receive a pay-off from the state for ‘helping people into work’. No mention of the fact that the job is the result of a trade-off: for every person given a job through the Work Programme, another was unable to get the job themselves.

Providers offer a number of benefits to employers to persuade them to participate, not least among them is the ability to offer employees who will work without for a period of time.

How do they get paid?

There are a number of pay scales for Work Programme providers depending on the age and status of the participant but to keep it simple I’ll refer only to persons over 25yrs of age on Jobseekers Allowance, however many of the people sent to the Work Programme are sick or disabled people on Employment Support Allowance, for whom the provider can get considerably more money. All details are available here.

How successful have they been?

Not very. The scheme has only been running since June 2011 but statistics from A4E suggest they’ve succeeded in getting fewer than 10% of people referred to them into work.

What can we do?

The Work Programme is an attack on us all, it’s just the latest in a trend of labour market restructuring that favours increased casualisation, low pay and disempowerment, deliberately putting yet more control over a person’s life in the hands of private companies and the state.

But the Work Programme providers are vulnerable, in the current climate they’re likely struggling to get by and certainly failing to meet targets. That means anything we can do to undermine their operations is a further disincentive for the scheme to continue.