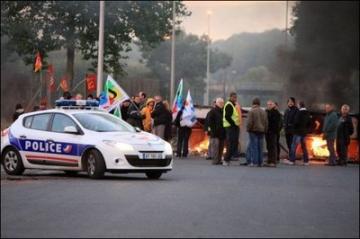 Here too it is pointed out how neoliberal deregulation in the financial sector led to the kind of speculative antics that triggered the financial crisis – yet more neoliberalism is prescribed as the cure. The PCS union and UKUncut activists point out the massive £120bn or so ‘tax gap’ that if collected could easily save more than austerity (instead, the government is cutting tax collectors). It is pointed out that the welfare state was founded at a time when Britain was bankrupt and heavily indebted from WWII, but is now being dismantled in the upswing from a relatively minor recession and a modest national debt. In short, there’s no shortage of arguments as to the ineffectiveness or unreasonableness of neoliberal policies. So why aren’t we winning?

The reason that reason gets us nowhere is that politics is not based on good arguments but on power relations. Democracies institutionalise power struggles to a certain extent, since it’s rather disruptive to have periodic coups and civil wars every time there needs to be a change of government. But only certain interests are institutionalised. Here’s a clue: they’re not ours. Thus none of the parties anywhere near power oppose the cuts (Labour included). The Lib Dems are a textbook example of what happens when previously minor parties get near power – they become all-but indistinguishable from the rest. Since our interests do not figure in this system, reasoned argument gets us nowhere. We win the argument, the cuts go ahead anyway and at best we can feel a sense of righteous indignation.

If we want to win, we need to recognise that being right doesn’t cut it. It’s a matter of power. A case in point: it is true that the British welfare state was founded at a time when the national finances were in a far worse state. But it’s worth looking at what the ruling class were saying when the welfare state was founded. For the avoidance of any doubt, let’s hear from a Tory: “We must give them reforms or they will give us revolution”, said Quintin Hogg in 1943. When the ruling class feared the working class, a welfare state was a price worth paying. Now they don’t fear us, they feel confident to dismantle it. So the paradox is without the threat of revolution, reformism is a non-starter. On the other hand, with an unruly mob on the streets and a strike-prone workforce, those reasoned reformists all of a sudden look like workable negotiation partners to whoever's in government. They'll no doubt claim it was their 'responsible' protests which got them there.

It’s all about the balance of class forces. It’s primarily a power struggle, not a moral argument. We might have right on our side, but might will determine the outcome. For the fight against the cuts, there are several implications. Symbolic protest won’t cut it. If actions like UKUncut move from largely awareness-raising into the realms of economic blockades, then we’ll be getting somewhere. And the state will react accordingly, we must be prepared for more police violence if we’re serious about winning. No doubt such tactics will also be condemned by those notionally on ‘our side’ just like Aaron Porter condemned the Millbank Riot which kick-started this movement. The irony is without such a movement, they’re powerless too. But given the TUC is in thrall to the Labour Party, and the lack of independent workers’ organisation, sustained, co-ordinated strike action against austerity looks unlikely. On the other hand economic blockades have been used to great effect in France both as a standalone tactic and in support of strike action.

The essence of the idea is to blockade economically significant targets from shopping centres to commuter hubs to fuel depots in order to inflict economic damage comparable to a strike. To be effective, these must be mass actions, otherwise the police are adept at arresting the participants, especially if d-locked or glued-on in the activist fashion. We don’t need martyrs, we need results! We’ve already seen that large crowds can be capable of defending themselves against police attacks, especially if they go prepared knowing what to expect (like some of the protective clothing that has appeared on London demos). Winning the arguments and making reasoned criticisms is all well and good, but it won’t stop the cuts. As a man who spent most of his life making criticisms said, "not criticism but revolution is the driving force of history".* When the ruling class fear us, we’ll start winning concessions.

* Karl Marx, The German Ideology – his philosophical attack on those in his day who thought ideas alone drove the course of history.

Great article, JK. The point about society being a power struggle not a debating chamber rings especially true.

Economic blockades such as

Permalink Submitted by Anna-Rose on Sun, 31/07/2011 - 03:26
Economic blockades such as those in France are a good idea but the French seem to have Revolution in their DNA. The British less so. Could this change? It's about time it did. I certainly agree that none of the parties cut the mustard, they are all in thrall to the God of Mammon. Privatisation and cuts are the direction they'll all follow. It is a sad fact that sometimes it indeed DOES take a certain amount of so-called violence to give results. I mean, had the student demos been peaceful like the anti-Iraq demo in 2003, it would barely have been covered by the media. There are dozens of peaceful protests taking place in the UK all the time that nobody even knows about. I'm not saying it is right to smash windows, etc.... but sometimes something has got to be done. And since it is obvious that even minor criminal damage has resulted in unreasonably punitive sentences to deter future protestors from going down that path, I like the idea of economic blockades. What cannot happen is that people take these cuts lying down, and thenwake up one day and say 'what happened?,where's our NHS? how to survive without a job, etc.....'

this is silly, the welfare

this is silly, the welfare state should be dismantled, why make people a burden on others? we should not be obligated to support anyone we do not choose to. I hope the nhs is next, it's a state enforced health insurance with no opt out which makes the weak and sick a burden on the healthy. What we need is a libertarian party.
and as for tax evasion, how about instead of protesting you learn from them and dodge the massively unfair taxes yourselves, then the system will go bankrupt.

This article was published on 20 January 2011 by the SolFed group in Brighton. Other recent articles: