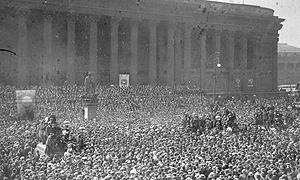 Liverpool SolFed members joined around 150  people on St George's Plateau in Liverpool city centre today to commemorate the brutal attack on workers by police that took place 100 years ago .

" We’re gathered here today, peacefully, to demonstrate our determination to win this long and terrible battle against the employing classes and the state. What does that mean? Only this. All the transport workers of Liverpool are arm-in-arm against the enemy class."

-  speech given by strike leader Tom Mann, read it in full here.

On August 13th 1911, thousands of workers and the ir families gathered here to demonstrate and listen to speeches by figures from the trade union movement . A t around 4pm,  the police, who had been waiting nearby, brutally  attacked the demonstrators, leaving scores injured. Skirmishes between workers and the police continued for days after and  the armed naval cruiser HMS Antrim was ordered to sail into the Mersey. Read more about the events  surrounding the strike here.

Today's event was one several planned to remember the 100th anniversary of the Liverpool general transport strike.

- On Monday, trade unionists and others will meet in Everton to commemorate the murder of Michael Prendergast (a docker)  and John Sutcliffe (a carter)   by police on Vauxhall Road .

- On Saturday 20th August, Liverpool Solidarity Federation will host a public meeting at the  Black-E  looking at 1911 and its relevance to radical working-class militants today.

This article was published on 13 August 2011 by the SolFed group in Liverpool. Other recent articles: